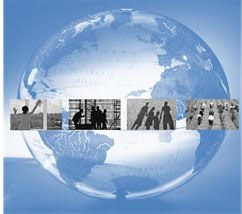 In 2014, I organized and chaired an international conference on Migration and the Informal Economy at the University of California, Davis. The Global Market of Unskilled Labor: A Research Conference, featured 18 presentations from a diverse group of international scholars. Over 140 people attended the conference including representatives from the International Labor Organization, the World Bank, AFL-CIO, the Consular-Generals of Mexico and Norway, and program officers from private foundations. Some of the research presented will be published as a special issue of Population, Place, and Space in October 2017.

The major outcome of the conference was the creation of an international working group of scholars engaged at the intersections of migration and the informal economy in post-industrial economies. More information about the working group can be found here.Together, the members of the working group seek to interrogate the immigration-informality-social deterioration hypothesis that has become salient in policy debates in post industrial nations.

Over the last 30 years a global shift in the nature of work, characterized by a growing employer preference for flexible and cheap labor and growth in the size and patterns of mobility of labor, has coincided with the proliferation of informal employment arrangements across capitalist societies. These processes have led some analysts to conclude that growth in both “legal” and “illegal” immigration induces growth in the informal economy. At the same time, many researchers continue to make an implicit connection between immigration, growth in economic informality, and negative socio-economic outcomes for migrant receiving societies (Perry et. al, 2003; Meagher and Yunusa 1996; Snyder 2000; Kim 2005). This immigration-informality-social deterioration connection has become particularly salient in policy deliberations across the globe, giving rise to the development of complex social, economic and political processes that have dramatically shaped opportunities afforded to migrant working populations across capitalist societies.

Yet, little is known about the global flows of unskilled workers and the ways in which migration influences the informalization of employment in the migrant receiving economies. Through a series of collaborative and solo efforts, my work explores the following research questions: